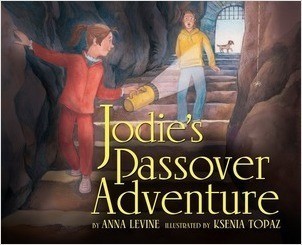 “During the week of Passover, Jodie’s cousin Zach visits Jodie and her family. The siblings all want to spend time with Zach and argue about who is to entertain him. Jodie succeeds in persuading Zach, who is initially fearful, to accompany her on an archeological adventure to Hezekiah’s Tunnel. Places in Jerusalem are alluded to with illustrations and brief historical descriptions. Jodie helps Zach overcome his fears through her logic-based explanations. With the help of a flashlight Jodie has received for finding the afikomen, the cousins solve the ‘riddle of the middle’ pointed out by Jodie’s archeologist father at the beginning of their tour; the original tunnel was dug from two starting points with the workers meeting in the middle. Double-page illustrations move the story from the start of Jodie’s exploration outside the tunnel where no clear entrance is indicated, to a wall that shows markings put there by the original builders and then back to the outside where they are met by a burst of sunlight. Without any knowledge of Jerusalem, children may be overwhelmed by the many unfamiliar places mentioned in the text. The story itself is loosely related to Passover in that it occurs during the holiday, a Passover picnic is packed and King Hezekiah once held a very large seder. The tunnel, itself, the main focus of the story, is not related to the holiday. Recommended for ages 6-9.” —Jewish Book World