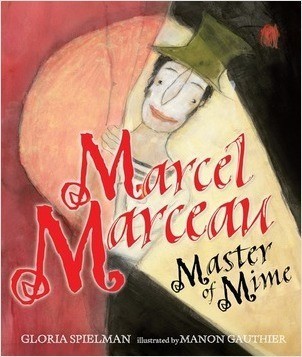 “The noteworthy life of Marcel Marceau, born Marcel Mangel, is explored in this attractive picture book. Adults who are familiar with his famous work as a mime will be interested in his early experiences as a young boy growing up in Strasbourg, France on the eve of World War II. In an expressive and straightforward text, the author tells the story of a popular boy who wanted to be an entertainer like Charlie Chaplin from a very young age. As a citizen in Strasbourg, he and his family were forced to leave the city in a mass exodus of residents immediately after the Nazi invasion of Poland in 1939. At sixteen years old, he joined the French resistance and used his drawing skills to alter information on the identity cards of children. He also led several trip across the border, taking them into the safety of Switzerland. His father, a kosher butcher, died in Auschwitz, but his mother and brother survived with Marcel in Paris. Eventually, he went to drama school and singlehandedly revived the art of mime, which had been almost forgotten. The pen and ink with watercolor art is striking and complements the softly told story perfectly, with the muted browns and beiges of wartime changing to red as Marcel finally peeks around the red curtain at his first show in 1947. The last two pages thankfully include real photos of the famous French artist in various poses as present day adults remember him. The book would have benefited from an author’s note offering a simple background history of the region or why Marcel’s family would be ordered to leave their city by their own government or what eventually happened to Marcel’s father. (This would help the adult reader of the book, actually.) Marcel died in 2007 and this effective picture book is a pleasing tribute to his life and memory.”—Jewish Book World