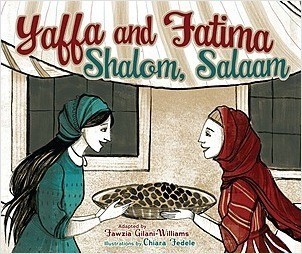 “Yaffa and Fatima are neighbors in the Land of Milk and Honey, where each tends her own date grove.
Every day they pick and sell their dates, cook and share tasty foods, and pray to God—Yaffa in the
synagogue and Fatima in the mosque. When hard times come, they worry about the other’s welfare, and
when they realize that each has been secretly sharing with the other, they are grateful for their friendship.
Inspired by traditional Jewish and Arab tales that usually feature brothers, as in Neil Waldman’s The Two
Brothers: A Legend of Jerusalem (1997), this female-oriented story is told in folkloric style, adding a
multicultural emphasis not present in the originals. Yaffa and Fatima both observe their own cultural and
linguistic traditions, but that never prevents them from appreciating their differences and caring about the
other. Fedele’s artwork features earth tones (appropriate to the arid climate) accented in teal (for Yaffa)
and red (for Fatima). A timeless story, this tale makes its point without ever becoming didactic.”
―Booklist Online