David A. Kelly is an established children’s book author, travel writer, and technology analyst.
After years of working with technology companies, David starting writing travel stories for the Boston Globe, the New York Times, and many other newspapers. When he became too busy playing baseball with his two sons to travel, he started writing children’s books. His first book, Babe Ruth and the Baseball Curse, tells the true story of Babe Ruth and the curse of the Bambino. His Ballpark Mysteries series of chapter books follows cousins Mike and Kate to different major league ballparks to solve a mystery.Miracle Mud is his first picture book. It’s a good bet that his next book might be baseball-related as well!
David lives 15 minutes from Boston’s Fenway Park in Newton, Massachusetts with his wife Alice, two sons, Steven and Scott, and a dog named Samantha. For more information, visit David’s webpage – www.davidakelly.com or his Ballpark Mysteries website – www.ballparkmysteries.com.

I had a lot of favorite books when I was a child. One of them was Harriet the Spy. The mixture of investigation, sneaking around, and the thoughts that Harriet has was right up my alley. I loved the idea of spying on other people and keeping a log of what I saw.  I even went as far as to go down to the store in the village to look for miniature pens and small notebooks that I could carry with me to write notes and observations. Another book that made a strong impression on me was one called The Mad Scientists Club, which detailed the adventures of a club of boys who used science and smarts to play tricks on the people in their town and do cool things like win a hot air balloon race and build a miniature submarine. Of course, I also liked mysteries, like Encyclopedia Brown and the Hardy Boys.

It’s hard to beat the opening line from Charlotte’s Web:
“Where’s Papa going with that ax?” said Fern to her mother as they were setting the table for breakfast.
That line hooks the reader immediately, with an important question, a sense of place, and strong relationships. How could you not want to read more?

I have a lot of favorite authors and books. Like a million other people, I’m waiting for the next Wimpy Kid book, but you also can’t go wrong with the classics. Anything by Robert McCloskey is great, especially his Homer Price series. I’ve also re-read James and the Giant Peach many, many times. I love the way it mixes real, painful issues like having your parents killed or abusive caretakers, with imagination, ingenuity, and a joy for discovering something new.

I became inspired to write a children’s book back in 2005 when I was spending a lot of time reading early chapter books to my sons, who were in elementary school. It certainly helped that I’d always loved reading and was looking for an alternative to the business, technology, and travel writing that I did for my job. My young sons were reading a lot of mystery books and sports books, which gave me the idea for my Ballpark Mysteries series. I looked around for children’s books that featured both sports and mysteries, but didn’t find many that fit the bill. That’s when I realized that there was something missing in the market—adventure/mysteries that were set in the dozens of really cool cities and ballparks around North America.  From there, I’ve gone on to write other books about baseball because there are so many interesting baseball stories. 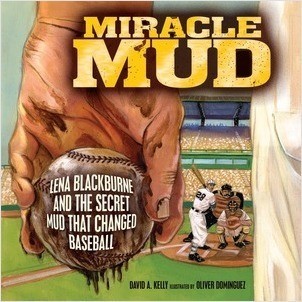 Browse all titles by David A. Kelly →