For the last fifteen years, James Burks has worked as an artist in the animation industry for various studios including Disney, Warner Brothers, and Nickelodeon. Projects he’s worked on include the Emperor’s New Groove, Atlantis, Treasure Planet, Home on the Range, Space Jam, The Iron Giant and the television shows Wow Wow Wubbzy, Ni-hao Kai-lan, The Dinosaur Train, and most recently on Fan Boy and Chum Chum. About three years ago, James started writing and illustrating his own books. His first graphic novel for kids, Gabby and Gator, published by Yen Press, was a Junior Library Guild selection. James is currently hard at work on some other great books that will be out in the next couple of years.

As a kid I remember really liking Watership Down. I also spent a lot of time reading mysteries and choose your own adventure books. On the drawing side of things I started reading and drawing Garfield when I was in the third grade.

That’s a tough one. I can’t think of anything off the top of my head. “You’re killing me, Smalls,” is something I use regularly but that’s from the movie The Sandlot.

If I had to pick just three they would be J. K. Rowling, Charles Schulz, and Tim Burton.

I wanted to become an author/illustrator because I love to draw and create my own stories. There’s something magical about bringing an idea to life with words and pictures.

My advice would be to follow your own path. Don’t try to create works for the marketplace, instead create stories that you are passionate about. If you’re an artist I’d say just to keep drawing. Draw everything. The more versatile you are the easier it will be to bring your imagination to life. 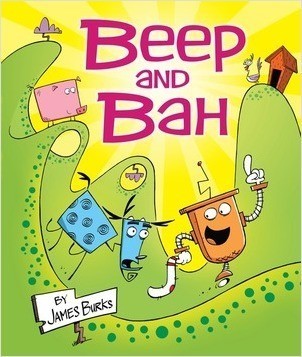 Browse all titles by James Burks →