Young adult novelist Ginny Rorby is the author of Dolphin Sky (Putnam, 1996), Hurt Go Happy (Tor Books, 2006), The Outside of a Horse (Dial Books, 2010) and Lost in the River of Grass (Lerner Books, March 2011). Dolphin Sky was nominated for the Keystone Reading Award. Hurt Go Happy was a Junior Library Guild selection and a Scholastic Book Fair selection, has been nominated for reading awards in six states, and won the ALA 2008 Schneider Family Book Award. The Outside of a Horse is a Scholastic Book Fair selection, and Lost in the River of Grass is a Junior Library Guild selection. Ginny was raised in Winter Park, Florida, and lived in Miami during her career as a Pan American flight attendant. She holds an undergraduate degree in biology from the University of Miami, and an MFA in Creative Writing from Florida International University. Her goal, after wrapping up her flying career and her graduate studies, was to move someplace where she would never be hot again. She now lives on the chilly coast of northern California with her thirty-year-old parrot and way too many cats. Ginny was co-director of the Mendocino Coast Writers Conference for nine years and continues her involvement with this 22-year-old institution. She served as President of the Mendocino Coast Audubon Society for seven years, was on the board of the Mendocino Coast Botanical Gardens, is past president of the Point Cabrillo Lightkeeper’s Association, and continues to serve on the PCLK board of directors.

I don’t have one single line from a book that I love above all others, but I do have a couple of quotes from other authors that I think sum up the reason I write:

“If the book will be too difficult for grownups, then you write it for children.” —Madeleine L’Engle

“Teaching a child not to step on a caterpillar is as important to the child as it is to the caterpillar.” —Bradley Millar

I didn’t. It never occurred to be a writer until I wrote an editorial comment for a local newspaper. An editor called me and said ‘if I could write like that, they would publish anything I wrote.’ I was at University of Miami working on a degree in Biology, but the next semester I took a creative writing class, and here I am.

Practice, practice, practice. Writing, like learning to play a musical instrument, singing an aria, playing a sport well, or just living life productively, takes years of practice. Find your unique voice, then hone your skills. Don’t give up. There is no better occupation. 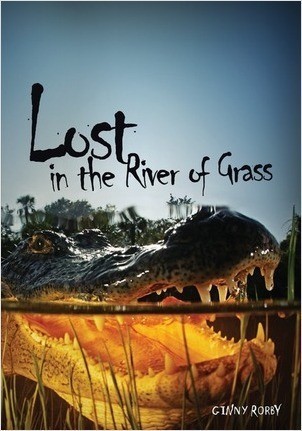 Lost in the River of Grass

Browse all titles by Ginny Rorby →