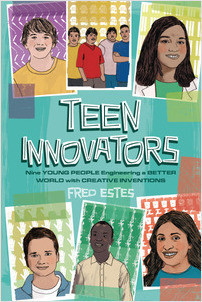 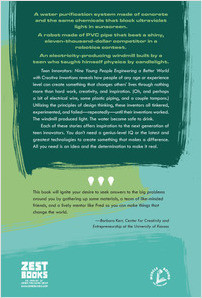 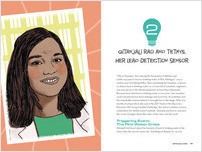 Teen Innovators tells the stories of discovery and the inventions of nine young students.

For example, twelve-year-old Gitanjali Rao, appalled by the tragedy in Flint, Michigan, found a cheaper, more effective way to test for lead in drinking water. Four undocumented teenagers from an underfunded high school in Phoenix built an underwater robot from spare and found parts. Substituting hard work and creative thinking for money and expensive equipment, they won a national robotics competition, beating a well-funded team from MIT. At fifteen, William Kamkwamba used materials from junkyards near his home in Malawai to build a windmill to generate electricity and pump water for his village.

While each profile tells a different story, the reader soon sees the common threads of determination and ingenuity. Stories include:

Science educator and professor Fred Estes explores the motivation, challenges, and lives of these teen scientists and explains the science behind each invention simply and clearly. Readers will see how the science they study today in school relates to these important discoveries.

“The rich variety of individuals and projects highlighted will encourage budding scientists. A compelling read for teens interested in the STEM fields and an inspirational resource for science classrooms.”—Kirkus Reviews

“While all faced challenges, these teens forged ahead toward their visions with creative confidence. Design thinking and other creative problem-solving skills may help you, too, unleash your own inspiration. Fred’s book does a great job of getting you started on your journey.” –David Kelley, founder of Hasso Plattner Institute of Design at Stanford and IDEO, co-author of Creative Confidence

Fred Estes taught science for nearly two decades in a school near his home in San Francisco. He's written several articles about science teaching, including "Compost: The Rot Thing for Our Earth" and he is a peer reviewer for a National Science Teaching Association journal. Before that, he taught high school English, worked as a financial analyst, joined an AI startup, developed corporate training programs, and earned a doctorate in educational psychology and technology. Currently, he teaches graduate students and teachers about design thinking, innovation, creative teaching methods, and hands-on-STEM curriculum.

Teen Innovators tells the stories of discovery and the inventions of nine young students. For example, twelve-year-old Gitanjali Rao, appalled by the tragedy in Flint, Michigan, found a cheaper, more effective way to test for lead in drinking water. Four… View available downloads →

Be the First to Read Fall Books

By Megan Ciskowski, Associate Publicist New books await on our NetGalley shelf! Be among the first to read and review our Fall 2022 titles. Picture Books Be a Bridge by Irene Latham and Charles Waters, illustrated by Nabila Adani Upbeat rhyming verse and colorful illustrations of a… View →