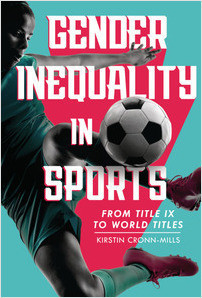 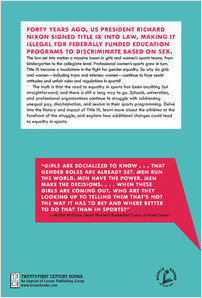 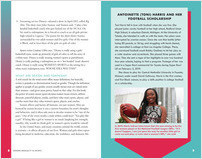 From Title IX to World Titles

“We trained just as hard and we have just as much love for our sport. We deserve to play just as much as any other athlete. . . . I am sick and tired of being treated like I am second rate. I plan on standing up for what is right and fighting for equality.” —Sage Ohlensehlen, Women’s Swim Team Captain at the University of Iowa

Fifty years ago, US president Richard Nixon signed Title IX into law, making it illegal for federally funded education programs to discriminate based on sex. The law set into motion a massive boom in girls and women’s sports teams, from kindergarten to the collegiate level. Professional women’s sports grew in turn. Title IX became a massive touchstone in the fight for gender equality. So why do girls and women—including trans and intersex women—continue to face sexist attitudes and unfair rules and regulations in sports?

The truth is that the road to equality in sports has been anything but straightforward, and there is still a long way to go. Schools, universities, and professional organizations continue to struggle with addressing unequal pay, discrimination, and sexism in their sports programming. Delve into the history and impact of Title IX, learn more about the athletes at the forefront of the struggle, and explore how additional changes could lead to equality in sports.

“Girls are socialized to know . . . that gender roles are already set. Men run the world. Men have the power. Men make the decisions. . . . When these girls are coming out, who are they looking up to telling them that’s not the way it has to be? And where better to do that than in sports?” —Muffet McGraw, Head Women’s Basketball Coach at Notre Dame

“Fighting for equal rights and equal opportunities entails risk. It demands you put yourself in harm’s way by calling out injustice when it occurs. Sometimes it’s big things, like a boss making overtly sexist remarks or asserting they won’t hire women. But far more often, it’s little, seemingly innocuous, things . . . that sideline the women whose work you depend on every day. You can use your privilege to help those who don’t have it. It’s really as simple as that.” —Liz Elting, women’s rights advocate

“[A] helpful tool for understanding the history of the Title IX law and its impact on sports communities.” –Children’s Literature

“A thought-provoking look at women’s history and its ongoing debates.”—Booklist

“Necessary reading, particularly for those who think the battle is won and done.”—Kirkus Reviews

I’m not an athlete. No matter how much I enjoy being active, I’m too clumsy for sports. Too uninterested in competition. But I raised an athlete, and we’re a family who enjoys watching sports of all kinds. An intense amount of dedication and determination goes along with athletic… View →