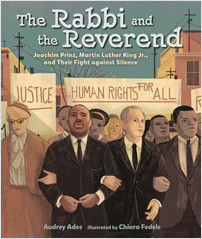 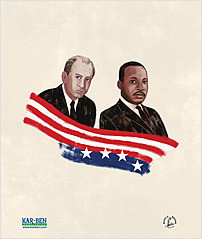 The Rabbi and the Reverend

When Dr. Martin Luther King Jr. gave his “I Have a Dream” speech at the March on Washington, he did not stand alone. He was joined by Rabbi Joachim Prinz, a refugee from Nazi Germany, who also addressed the crowd. Though Rabbi Prinz and Dr. King came from very different backgrounds, they were united by a shared belief in justice. And they knew that remaining silent in the face of injustice was wrong. Together, they spoke up and fought for a better future.

Audrey Ades grew up in New England and holds degrees in theater and psychology. She lives in South Florida with her husband, son, and persnickety Pomeranian, Cookie.

Chiara Fedele was born in Milan, where she attended the Brera Academy. Her illustrations have appeared in many picture books, including Yaffa and Fatima: Shalom, Salaam and The Rabbi and the Reverend: Joachim Prinz, Martin Luther King Jr., and Their Fight Against Silence. Chiara also teaches drawing and painting techniques. She lives in Pavia, Italy.