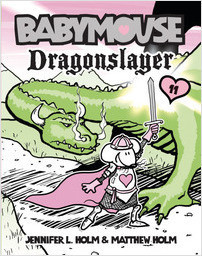 From the Series Babymouse

With multiple Children’s Choice awards and over 1.7 million books in print, kids, parents, and teachers agree that Babymouse is perfect for fans of Junie B. Jones, Ivy and Bean, Big Nate, Dork Diaries, and the Ramona chapter books!

Get ready for the next big epic fantasy . . .

In a distant kingdom a growing darkness falls over the land. One is called to defend . . . to bring hope . . . to slay the Mighty Dragon . . . could it be . . . Babymouse? Our brave young hero will lead her fellow Mathletes in the quest of a lifetime, a death-defying fight to win back both her school’s honor and the coveted GOLDEN SLIDE RULE. Can she conquer the evil Owlgorithms and her own personal dragon—MATH? Find out in Dragonslayer—the 11th hilarious, action-packed installment of the beloved Babymouse graphic novel series!

Here’s what people are saying about Babymouse!

Starred Review, The Horn Book: “Nobody puts Babymouse in the corner!”

Booklist: “Cute, smart, sassy Babymouse is fun and funny, and this book, like its predecessors, will draw reluctant readers as well as Babymouse fans.”

Brother-and-sister team Matthew Holm and Jennifer L. Holm are the creators of the Babymouse series. Jennifer is the bestselling author of several highly acclaimed novels and Matthew is a graphic designer and freelance writer.

Brother-and-sister team Jennifer L. Holm and Matthew Holm are the creators of the Babymouse series. Jennifer is the bestselling author of several highly acclaimed novels and Matthew is a graphic designer and freelance writer. 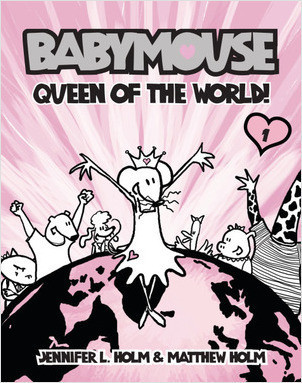