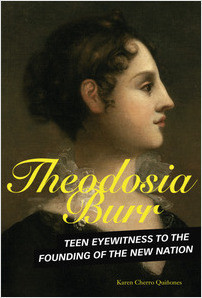 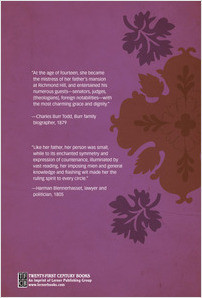 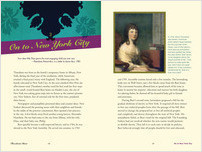 Teen Eyewitness to the Founding of the New Nation

Theodosia Burr, daughter of Vice President Aaron Burr, came of age in New York City when the New Nation was growing up. She attended the inauguration of President George Washington in 1789, was at her father’s side on the campaign trail and at his inauguration in 1801, attended presidential addresses to Congress, and hosted the most prominent politicians and thinkers of her time.

The Burrs’ ideas about educating young women were revolutionary. Theodosia was an experiment in the equal treatment of women—regardless of social status—in education, family life, society, and the law. The family believed that women had an important role to play in the New Nation, and Theodosia was fully prepared.

Based on research at libraries and archives, and from the rich body of letters Theodosia and her family left behind, this historical narrative introduces readers to a most unusual girl who pursued a radical new path for women.

“[A] useful purchase for school libraries. . . . Readers wanting to dig deeper after seeing Hamilton will benefit from a read.”—School Library Journal

“[A] well-researched and interesting look at a little-known person and the times in which she lived.”—Booklist

Karen Cherro Quiñones became interested in the early history of New York City while working in the Wall Street area where many sites dating to the seventeenth and eighteenth centuries can still be seen. She eventually left her corporate career to become a full-time historian. Her favorite thing to do is teach others about the wonderful people, events, and places that came before us. Quiñones is the founder of Patriot Tours (www.patriottoursnyc.com), leading groups on history tours in New York on most days of the week. She can often be seen on the Travel Channel's Mysteries at the Museum. Follow her on social media, where she writes about American history as PatriotToursNYC.com.