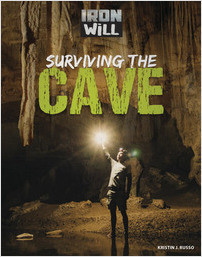 From the Series Iron Will

A young Thai soccer team and their coach entered a cave complex on June 23, only expecting to be inside a short while. But it was monsoon season in Thailand, and while the group was still inside, a flash flood filled the cave complex with water, trapping them there. This was the start of their ordeal—9 days without light, and 18 days before rescuers could retrieve them. Iron Will: Surviving the Cave recounts five tales of survival of people trapped in cave systems, where food is scarce and signaling for rescue is nearly impossible. From cave collapses, to flooding, to hypothermia, there are many possible hardships faced by those who have been trapped underground in the dark—but their iron wills can help them make it out alive.

“This series packs a punch and is a strong purchase for middle school libraries seeking narrative nonfiction.”—School Library Journal, Series Made Simple

Kristin J. Russo holds a BA in English from the University of Massachusetts at Boston and an MA in Teaching from Rhode Island College. She lives with her family near Providence, Rhode Island.