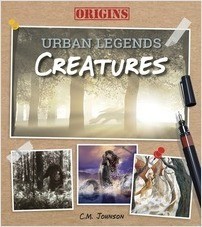 From the Series Origins: Urban Legends

A hiker spots a large, ape-like creature walking through the woods. Neighbors discover hoof prints on their roofs. Swimmers see a dark, snake-like shadow moving under the water. Creatures, part of Full Tilt’s Origins: Urban Legends series, examines the origins and reported sightings of four mysterious creatures. Are they simply myths and legends, or could they be real? Many believe that some stories were invented to increase newspaper sales, while some people insist that they have seen and interacted with the creatures. Students will explore the evidence for themselves to separate fact from fiction.

“A balanced take that never sacrifices the fun factor.”—Booklist

C. M. Johnson grew up in Lake of the Woods County, Minnesota, and has written literary biographies of Jane Johnston Schoolcraft and Tess Gallagher for the American Writers Supplement. She lives in Minneapolis.