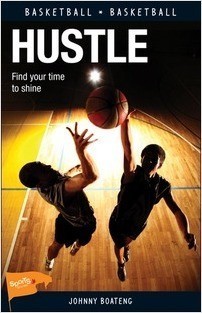 Fourteen-year-old Johnny Huttle—nicknamed “Hustle” by his best friend, Rex—comes from an inner-city neighborhood, where the streets are tough and the street ball games are rougher. More than anything, Johnny wants to shine as the school’s star basketball player. But the one thing standing in his way is his best friend, Rex, who outshines Johnny effortlessly at everything, on and off the court. This makes Johnny angry enough that his game and their friendship suffer. When Rex starts getting into trouble in the neighborhood and is suspended from the team, Johnny has to put his jealousy aside to help his friend—and his basketball team at the championship.

Johnny Boateng played division basketball in Indiana and is the author of the award-winning sports novel Hustle. He grew up in North America, is of African descent, and now lives in Vancouver.