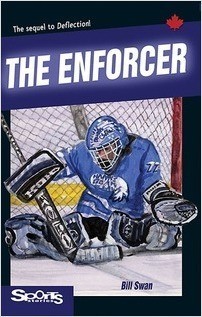 In this hilarious sequel to Deflection, Jake Henry has achieved one of his dreams: to become the goalie for the Bear Claws of the Oshawa Lakeridge League. Then, bad news. The team coach moves away, and without a replacement, the Bear Claws might not finish the season. At first Jake is relieved when one of his three hockey-crazy grandfathers steps into the role. But can the team adapt to Grandpa P.J.’s old-school methods?