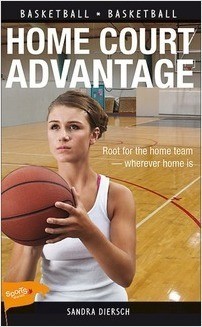 When Debbie is on the basketball court she feels free and alive. But while she’s a good player she’s also an aggressive one, and rough tactics get her in trouble more than once.

Off the court she’s different from other girls, a foster child without “real” parents of her own. When Debbie learns she’s going to be adopted, her world is turned upside down. Until, that is, she’s accused of stealing from a teammate. From then on, it’s an uphill battle to prove herself to her new parents and her team.

Sandra Diersch has taught writing courses to British Columbia students and aspiring adult writers. She has written eight books to date. She lives in Maple Ridge, B.C., with her husband and young daughter. www.sandradiersch.com