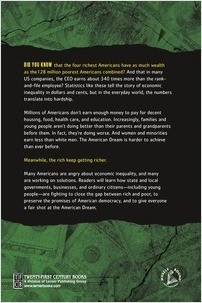 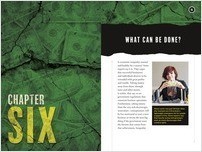 The American Dream under Siege

Millions of Americans don’t earn enough money to pay for decent housing, food, health care, and education. Increasingly, families and young people aren’t doing better than their parents and grandparents before them. In fact, they’re doing worse. And women and minorities earn less than white men. The American Dream is harder to achieve than ever before. Meanwhile, the rich keep getting richer.

Many Americans are angry about economic inequality, and many are working on solutions. Readers will learn how state and local governments, businesses, and ordinary citizens—including young people—are fighting to close the gap between rich and poor, to preserve the promises of American democracy, and to give everyone a fair shot at the American Dream.

“This exemplary piece of introductory economics deserves a place in every middle and high school library across the land.”—starred, Kirkus Reviews

“[A] valuable resource for young adults attempting to untangle the complexities of economics . . .”—School Library Journal

“This remarkably even-handed, lucid volume confidently leads readers through the murky world of wealth and economics in America. . . . Instructive, galvanizing nonfiction for a critical issue with widespread effects.”—starred, Booklist