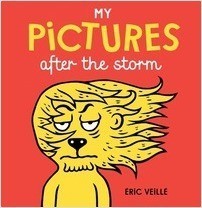 My Pictures after the Storm

With its funky format, clever rhymes, and funny images, My Pictures after the Storm is a witty and inventive take on “before” and “after.”

What happens to a lion after a storm? His mane is swept into a disheveled mess. What becomes of a pear after an elephant passes by? Compote! A frog after a spell? A prince. And the room after a battle? A big mess!

My Pictures after the Storm will have you chuckling at the after-effects of a dive bomb, a hairdresser, a flu, and more.

“Leave a copy casually open at the desk for instant circulation, or put the art teacher, language arts teacher, and this title together and wait for creative sparks to fly.”—starred, The Bulletin of the Center for Children’s Books

“While board covers, sturdy pages, and the picture-dictionary format may suggest early learning, do not be fooled: this conceptual compendium aims squarely at the elementary set with provocative delight.”—starred, The Horn Book Magazine

“This is a terrific little book that will amuse all out of proportion to its size.”—The Wall Street Journal

“Droll, imagination-stretching ways to get from here to there, from this to that, from now to later.”—starred, Kirkus Reviews

Eric Veillé lives in Paris, France. Formerly an artistic director in publishing, he now writes and illustrates children’s books published internationally, including My Pictures after the Storm and Encyclopedia of Grannies.