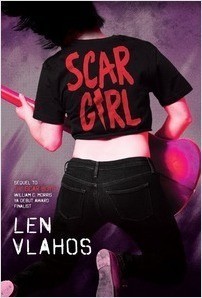 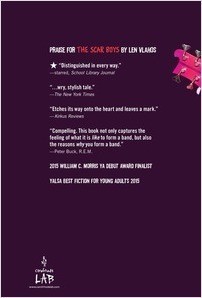 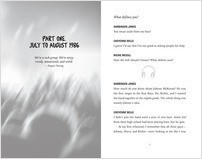 When The Scar Boys ended, the band has fallen apart. Harry and Johnny are barely speaking, and Cheyenne is feeling desperate about Johnny, who has retreated into silence. It’s only through their music that the group is able to rebuild their relationships, and they slowly begin to reach musical success and fame. In Scar Girl, Cheyenne, Harry, and Richie tell their own stories as they discover the ups and downs of being rock musicians—including meltdowns on stage, too much drinking, keeping secrets that should be shared, and having fights that test the limits of their friendship. The band’s reputation grows and grows, but will the kids themselves survive?

Len Vlahos delivers a powerful sequel to his bestselling YA sensation, The Scar Boys, with a story of love, music, and heartbreak.

“With plenty of human drama, strong character development, and more than its fair share of tough topics . . . Scar Girl will appeal to mature readers of realistic fiction, whether or not they read The Scar Boys.”—VOYA

“Picking up where The Scar Boys (2014) left off, this sequel uses an interview format to . . . give readers a look at how all four deal with various unfortunate events while still producing music that stands audiences on their heads. . . . [This] story will offer satisfying closure to the first book’s many fans who want to know what happened next.”—Booklist

“Vlahos, a finalist for the Morris Award with The Scar Boys, has succeeded in creating a sequel every bit as compelling and emotionally charged as its predecessor. . . . Like its predecessor, this novel will leave readers aching for an encore.”—starred, Kirkus Reviews

“This hilarious, big-hearted, and ultimately heartbreaking novel explores the ways that music can save us, and even, sometimes, the ways it can’t. Required reading for all of us who are scarred—inwardly or outwardly—so, in other words, everyone.” —Jessie Ann Foley, author of Morris and Printz Award Honor Book, The Carnival at Bray