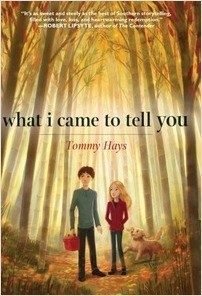 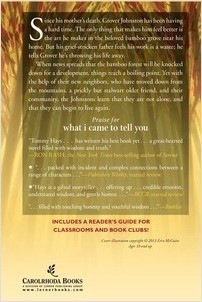 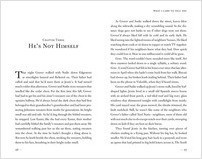 What I Came to Tell You

Since his mother died earlier this year, Grover Johnston (named after a character in Thomas Wolfe’s Look Homeward Angel) has watched his family fall to pieces as his father throws himself into his work rather than dealing with the pain. Left to care for his younger sister, Sudie, Grover finds solace in creating intricate weavings out of the natural materials found in the bamboo forest behind his North Carolina home, a pursuit that his father sees only as a waste of time. But as tensions mount between father and son, unlikely forces conspire to help the Johnstons find their way.

The new tenants in the rental house across the street who have come from deep in the Carolina hills seem so different from the Johnstons, but become increasingly intertwined with them in unexpected ways. Classmates, neighbors, teachers, and coworkers band together, forming a community that can save a family from itself.

In the spirit of such beloved novels as Newbery Medal-winning Missing May and Because of Winn-Dixie, What I Came to Tell You, the first middle-grade novel from critically acclaimed Asheville author Tommy Hays, is a story of grief, love, and hard-won redemption. Warm, evocative writing blends with an emotion-laden narrative that cuts to the heart of the reader.

“Tommy Hays has quietly but steadily established himself as one of the South’s finest novelists, and now he has written his best book yet. What I Came to Tell You is a great-hearted novel filled with wisdom and truth.”―Ron Rash, The New York Times best-selling author of Serena

“Tommy Hays tells a story that rips open your heart. This is a novel about what it means to face loss at an early age, and how salvation comes through both the creation of art and acts of every day kindness. I loved this book.”―Holly Goldberg Sloan, author of Counting by 7’s and I’ll Be There

“This dramatic yet dreamy story of loss, love and forgiveness offers much to the thoughtful reader.”―VOYA

“[T]his well-written novel will appeal to readers with artistic or literary leanings, or those with a fondness for Southern settings.” —School Library Journal

“Hays is a gifted storyteller, offering up an effective balance of credible emotion, understated wisdom, and gentle humor.” —starred, The Bulletin of the Center for Children’s Books

“Hays’ story is filled with touching honesty and youthful wisdom, all of which help undergird Grover’s own discovery of the healing power of family, love, and art.” —Booklist

“[P]acked with incident and complex connections between a range of characters. Hays is especially strong at depicting the network of people, old and young, who help Grover and his family move through their grief and, along the way, save his beloved forest.” —starred, Publishers Weekly

“Readers will be quickly and surely drawn in by quirky siblings Grover and Sudie, rooting for them to find a measure of peace and happiness in the wake of tragedy.” —Kirkus Reviews

Tommy Hays's first middle grade novel, What I Came to Tell You, is a VOYA Top Shelf Pick for Middle Grade Fiction 2014 and a Fall 2013 Okra Pick by the Southern Independent Booksellers Alliance. His novel, The Pleasure Was Mine, was a Finalist for the SIBA Fiction Award and has been chosen for numerous community reads. His other novels are Sam's Crossing and In the Family Way, a Book of the Month Club selection and winner of the Thomas Wolfe Memorial Literary Award. He is Executive Director of the Great Smokies Writing Program at the University of North Carolina Asheville. For more information please visit www.tommyhays.com.