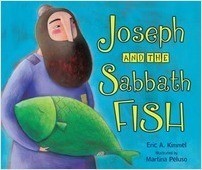 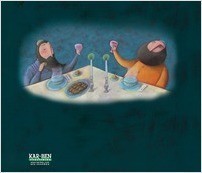 Joseph and the Sabbath Fish

Joseph always welcomes guests to his Sabbath table, while his greedy neighbor Judah scoffs at Joseph’s generosity. Even as his fortunes decline, Joseph’s door remains open. But times change and Judah turns to his Joseph for help. A very special fish helps Joseph save the day.

“Retold by a master storyteller, this new version of a classic tale is an all-around delight. Woven together with the joys of Sabbath celebrations are themes of generosity, hospitality, and the true meaning of wealth. The engaging prose and vibrant, colorful illustrations create a perfect picture book for home or library” —Dayton Jewish Observer

“Kimmel brings satisfyingly warm detail to a well-known folktale, in an elegant picture book set long ago on the shores of Galilee. Joseph of Tiberius loves to celebrate the Sabbath by selecting choice ingredients when preparing food and inviting all to share dinner with him. When his neighbor, Judah, scoffs that Joseph needs to be more selective, Joseph insists that the honor he gives to the Sabbath by keeping his house open is returned ‘a thousandfold.’ When Joseph’s fortunes turn and he becomes poor, those he has helped now share in providing food so that the Sabbath table is still filled with people. Judah, however, dreams that Joseph is in possession of his wealth and he sells all that he owns, buys a ruby and sets sail. A storm whips the cap with the jewel from Judah’s head and flings it into the sea. The ruby reappears inside a large fish, which Joseph’s wife is preparing, changing Joseph’s fortunes once again. When Judah returns, now poorer, he turns down Joseph’s offer to give him the ruby’s value. He would rather have Joseph’s friendship and the opportunity to share the Sabbath with him. Peluso’s two-page spreads fill pages to the edge, intense with jewel pastel and ink detail, blues and purples and the green of the fish. She draws solid, stately figures with stylized beards and a mysterious spark of animation in their eyes. It is true teamwork. Is the woman who later shows up as Joseph’s wife one of the neighbors whom Joseph welcomed when he was no longer wealthy? Like Joseph, Kimmel has taken care to honor tradition while adding his own inimitable storytelling touches.”—Jewish Book Council

Eric A. Kimmel has been writing for children for more than 40 years. His 100-plus titles include such classics as Anansi and the Moss-Covered Rock and The Chanukkah Guest. He lives in Portland, Oregon.

Martina Peluso studied at the Art Institute of Naples. Her artwork has been exhibited throughout the world. Her previous books include Joseph and the Sabbath Fish and Og's Ark. She lives in Naples, Italy, with her cats Peppe and Ernesto.