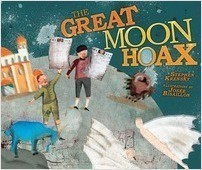 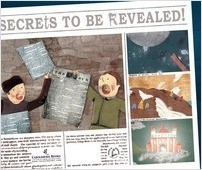 New Telescope Sees All! Amazing Secrets to Be Revealed! So the headlines read in the New York Sun one day in the summer of 1835. For a week straight, the newspaper printed stories and pictures of the discoveries made using a new telescope in far-off Africa. And on the streets of New York City, hundreds of newsboys shouted the headlines at the top of their lungs: Heavens Filled with Buffalo! Moon Beavers! Man Bats! We Are Not Alone! Every day, newsboys Jake and Charlie sold their stacks of newspapers quickly. The good business paid off for them—they could even afford a room at a boarding house. As they jingled the coins in their pockets, they wondered about what they were reading. Would the man bats fly to Earth? Would a moon ship carry treasure hunters into the sky? And would their good fortune last?

“This book would be a good supplement to a unit on how news reporting has changed over time.” —Library Media Connection

“Multimedia collages illustrate the news reports’ fanciful elements as effectively as they express the story’s rather bleak setting and its darker edge.” —Booklist

“Darkly imaginative illustrations by Josée Bisaillon, a Canadian artist, lend the story a tinge of social commentary. Using a mix of drawing, collage and digital montage to depict both the fantastical upright ‘moon beaver’ as well as the gritty urban terrain of life back on earth, Bisaillon shows why readers might have been so ready to believe.” —The New York Times Book Review

Stephen Krensky did not have the kind of childhood anyone would choose to write books about. It was happy and uneventful, with only the occasional bump in the night to keep him on his toes. He started writing at Hamilton College in upstate New York where he graduated in 1975. His first book, A Big Day for Scepters, was published in 1977, and he has now written over 100 fiction and nonfiction children's books––including novels, picture books, easy readers, and biographies. Mr. Krensky and his family live in Lexington, Massachusetts.

Josee Bisaillon grew up in St. Hyacinthe, Quebec, Canada. Her illustrations are a mixture of collage, drawings, and digital montage, taking us into a richly detailed and multidimensional world.