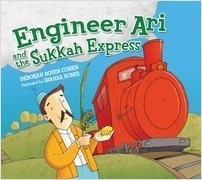 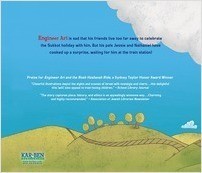 Engineer Ari and the Sukkah Express

As Engineer Ari drives his train to Jerusalem, he stops as friends along the way help him gather branches and fruit for his backyard Sukkah. When the Sukkot holiday begins, he is sad that those friends aren’t with him to join the celebration. But what surprise do his pals Jessie and Nathaniel have waiting for him at the train station? The sequel to Sydney Taylor Honor Award Winner Engineer Ari and the Rosh Hashanah Ride, this book celebrates a very special Sukkot with both new friends and old.

“In this sequel to the Sydney Taylor Honor Award winner Engineer Ari and the Rosh Hashanah Ride, Engineer Ari drives his train from Jerusalem to Jaffa, stopping along the way to collect fruit, branches, and a lulav and etrog from the friends he has made along his new route. After it is completed with the help of his engineer friends, Jessie (a woman engineer!) and Nathaniel, he feels sad that his new friends can’t celebrate Sukkot with him in his courtyard. But Jessie and Nathaniel surprise him by taking his sukkah apart, reassembling it, and fastening it to his train, so that he can share it at his stops along the way. Children learn much about the Sukkot holiday and the significance of what is used to construct a sukkah. There is an author’s historical note about the first train from Jerusalem to Jaffa in 1892. The reader learns that Ari’s three new friends are named in Hebrew for the three different parts of the lulva: myrtle, willow and palm, and that by counting the number of times the names appear in the story, the number of branches in the lulav will be revealed. The idea of the sukkah express, the appealing illustrations and the engaging characters will make this a hit with Jewish preschoolers.” —Jewish Book World