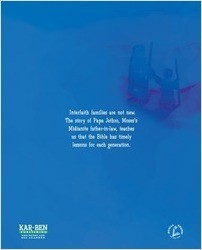 With warm watercolor artwork and a gentle storyline, this picture book sensitively looks at the issue of interfaith families. “Why can’t you be Jewish like me? Why can’t I be Christian like you?” To answer these questions posed by his granddaughter, a modern grandfather tells her the parallel story of Jethro, the famous non-Jewish grandfather of the Bible.

“Dippold’s biblical figures, set against goldenhued backdrops that reflect the dazzle of the sand and sun, remain distinct from contemporary scenes, which darken with blues as Grandpa Nick ends his tale by giving sleepy Rachel a sweet good-night hug. A welcome choice for the many children in similar situations.”
—Booklist

A gentile grandfather tells his Jewish granddaughter the story of Jethro (Moses’s Midianite father-in-law) and his Jewish grandson, Moses’s son Gershom. The parallels between modern-day family and the biblical one are effective, but the storytelling is confusing. An author’s note and the text itself promote the agenda of encouraging acceptance within interfaith families. Sand-color illustrations exude familial warmth.

In the past century, Jews, as well as other peoples, have increasingly been marrying out of the faith, merging cul-tures and religions into families. This book represents an attempt to deal with this issue as a young girl struggles to understand how she and her grandfather are related yet have different religions. The author compares this story to Jethro, Moses’s father-in-law, and Cershom, Moses’s older son. She discusses their relationship in the context of a grandfather explaining to his Jewish granddaughter that they can have a special relationship that is enhanced by their different religious backgrounds and beliefs. I found this book somewhat frustrating, as the author appears to gloss over the difficulties and confusion that happen when couples intermarry. She is also inaccurate, as the bibli-cal Jethro actually converted to Judaism. It was after Jethro converted that he came to visit Moses and suggested a system of delegation to judges to make Moses’s life as a leader more manageable. Because Jethro disapproved of the slavery in Egypt, he left there and settled in Midian. Amid great criticism, he offered hospitality to Moses and eventually became a Jew. If the author wants to help families deal with the challenges faced when intermarriage of religion occurs, she should avoid references to the Bible, which only accentuates the differences among faiths. In-stead, she could focus on ways we can work together, understand our various practices, and enjoy learning from one another. While our religious sources may be different, we all share common human characteristics and can enjoy hearing about and exploring one another’s religions and cultures.

“The cheerful watercolor illustrations enhance the text and add to its gentle sweetness. . . Readers who have a relative of a different religion will especially appreciate how this book reflects and validates their own families, but all youngsters will gain an understanding of how the lessons of the Torah still resonate in modern times.”
—School Library Journal