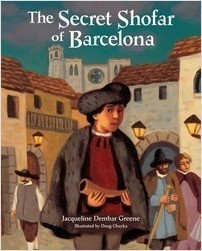 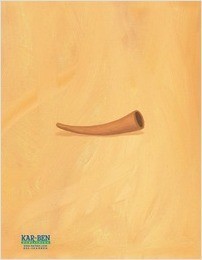 Symphony conductor Don Fernando longs to hear the sounds of the shofar. Like other conversos during the Spanish Inquisition, he has to hide his Jewish religion and pretend to follow the teachings of the church. But when he is asked to perform a concert celebrating the new world, he and his son Rafael devise a clever plan to usher in the Jewish New Year in plain sight of the Spanish nobility.

“The author looks to a Sephardic legend for this well-written story about a Spanish converso (secret Jew) who cleverly enables his secret community of Jews to hear the sound of the shofar at Rosh Hashanah. Set in Barcelona, during the Spanish Inquisition, Ms. Greene creates a story that makes it possible for us to feel the tension, sadness and fear within the underground Jewish community. She allows us to celebrate with great relief when father and son triumph over the Duke and the judges of the Inquisition by ‘hiding the shofar in plain sight.’

The illustrations are excellent and convey the depth of emotions that run from page to page throughout this story. The pictures are very expressive and admirably portray the Spanish community of the times. This would be an excellent addition to the High Holiday section of the library especially in communities with a Sephardic Jewish population.” —Forwordsbooks.com

“Basing her tale on legend, Greene provides a smooth, suspenseful view into a rarely depicted portion of Jewish history, when Jews led a dual life and managed to maintain their Judaic rituals by blending in or hiding their beliefs and traditions, sometimes in plain sight. Chayka’s deep, opaque paintings reflect an upper-class, dark-haired Iberian society juxtaposed with the Judaic rituals of the Rosh Hashanah meal.” —Kirkus Reviews

“Based on a legend, this intriguing slice of converso life offers a thoughtful hero and a suspenseful plot. The warm, opaque paintings are expressive and create a strong sense of place. Although the religious significance of the shofar is never explained, the story conveys its emotional pull for Jewish listeners. Themes of cultural identity and empowerment under oppression will appeal to readers of all backgrounds.” —School Library Journal

Jacqueline Dembar Greene is the award-winning author of more than 30 books for young readers, including the American Girl® Rebecca Rubin series and The Secret Shofar of Barcelona. She lives in Wayland, Massachusetts.