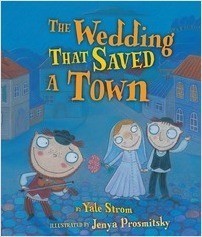 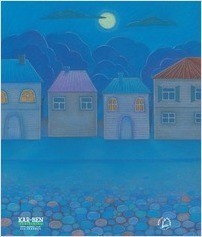 When Ziske’s klezmer band is invited to play at a wedding in Pinsk, they arrive to discover many of the people in the town very sick. But tradition says that if two orphans get married in a cemetery a miracle may happen, so Ziske sets his mind to finding the perfect couple.

“Yale Strom is an internationally-acclaimed musician and a professor at San Diego State University; he is also a gifted story-teller. His publisher, Kar-Ben, specializes in Jewish-themed children’s books, and the collaboration here of writer, artist, and publisher is ideal.

Strom’s vibrant, culturally-representative tale takes place in old Pinsk, located now in Belarus, but back in the old days it was in the ‘Pale of Settlement,’ the territory Jews were confined to during the reigns of the Czars. (Pinsk is where my own grand-parents came from). In Strom’s story, the little village’s problem is an epidemic of cholera, not an uncommon phenomenon in the swampy, humid land of the Pale. OY! What to do? Cleaning the streets, boiling water, even prayer have not yet helped.

Time for the rabbi to call in the itinerate wedding musician Yiske and explain to him the need for a ‘Black wedding’: the marriage in a cemetery of two orphans whose deceased loved ones will bless the wedding and thus the town. The problem? Only the bride has been found. As the town contributes wedding cake, a wedding gown, and a wedding dinner, the story moves to finding a suitable orphaned groom. The criterion? Goodness of heart. Yes, such a person exists, and, moreover, he already loves the bride.

The wedding happily happens, accompanied by klezmer music (the thrilling music traditional in Jewish Eastern Europe) and hopeful villagers. Guess what else—the leader of the klezmer band gets a telegram shortly afterward letting him know the cholera epidemic has ended. The story closes with a smiling Yiske thinking to himself, ‘… maybe miracles do happen!’

Strom’s prose captures the expressive cadences of the Old World, for example, not just one ‘Oy!’ but three—’Oy! Oy! Oy!’ making for a most enjoyable read-aloud experience.

Promitsky’s art is perfect, comical and warmly expressive of life in a shtetl (small Jewish town) from the cobblestone streets to the water buckets carried on people’s shoulders to the horse-drawn wagons. The art fits the story and adds enjoyable little details to the text, like Yiske’s cat scratching itself and, later in the text, the rabbi himself dancing to the klezmer music at the wedding.

A glossary of Yiddish words is appended, e.g. ‘shtetl’ and ‘klezmer.’

I hope to see more collaborations between Strom and Promitsky published by Kar-Ben. —National Center for the Study of Children’s Literature

With his village beleaguered by an outbreak of cholera, Pinsk’s learned Rabbi Yamferd decides, as legend dictates, to initiate a miracle by officiating at a “black wedding” of two orphans in a cemetery. Yiske and his Klezmer band are summoned to perform, but soon realize the chosen orphaned bride, Sheyndl-Rivke, has yet to be matched with the right orphaned groom. Amid the wedding preparations—dressmaking, cooking and baking—band leader Yiske sets out to interview three prospects: First the miller, Fyvush Fish, whose answers are too vain; next, Sruli Tsigel the carpenter seems too materialistic; finally the poor-but-honest water-carrier, Shmuel, provides responses that are full of heartfelt warmth. Shtetl life is rendered in pastel drawings that add a childlike comic relief to this tale based on an “unusual Jewish custom” meant to distract townsfolk from their troubles. A sense of worthy values is stressed while offering a flavor of the marriage rituals in a nontraditional setting.

“Prosmitsky’s illustrations are light-hearted and add flavor to the story, while author Strom is a well-known artist of klezmer music.”
—Library Media Connection

Yale Strom is a violinist, composer, film maker, writer, photographer, and playwright—as well as a leading ethnographer-artist of klezmer music. In addition to composing, studying, and playing klezmer music, he writes Jewish stories with klezmer themes. He is an artist-in-residence in the Jewish Studies Program at San Diego State University. He lives in San Diego.

Jenya Prosmitsky was born in St. Petersburg, Russia, and lived most of her childhood and teen years in Kishinev, Moldavia (former U.S.S.R.). She studied fine arts, illustration, and graphic design at Repin College of Arts in Kishinev before coming to the U.S. For over 10 years Jenya has worked as an interactive/graphic designer and children's book illustrator. She is the artistic creator of the Words Are CATegorical series for Lerner Publishing Group of Minneapolis. Jenya resides in Boston with her husband, Olivier, two daughters, Eugénie and Alexandra, and two cats, Ferruccio and Marcello.