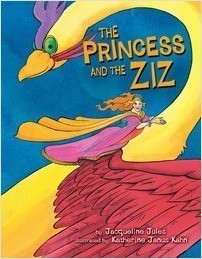 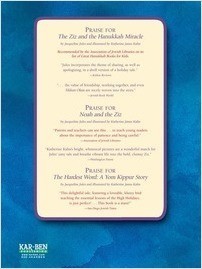 Called on to watch over King Solomon’s daughter, the Ziz takes Magda on a joyful trip around the world. But when she falls in love with a handsome young man, the Ziz’s jealousy gets the giant bird into trouble.

“Jules’s fourth Ziz book continues her versions of Midrash stories featuring the giant bird of Jewish mythology. The Ziz is summoned by the wise King Solomon of Israel for a critical job-keeping the Princess Magda company in her lonely tower. Locked up to protect her ‘from marrying the wrong man,’ Magda is thrilled when her wondrous new friend flies her across the world to see animals of the jungle, the pyramids of Egypt and the penguins in the South Pole. Returning from one of these trips they swoop down to save a young scribe falling off a cliff. The princess loves his books; the scribe loves her eyes. Jealous and worried, the Ziz soon separates them, which makes the Princess enormously unhappy. But the King, seeking happiness for his child, approves the relationship and unites them in marriage. Kahn’s watercolor scenes, which feature a goofy, green-eyed bird with a bright yellow body and oversized red wings, drive the humor in this adequate tale.”
—Kirkus Reviews