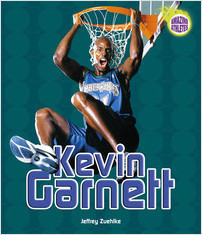 Kevin Garnett was the first player in twenty years to go straight from high school to the NBA. By his second season, he had become one of the NBA’s most popular players. The highest-paid basketball player in history by the age of 20, Garnett has led the Minnesota Timberwolves to the playoffs five years in a row. One of basketball’s most talented players, Garnett’s future looks bright.